Natural Disasters Are No Match for McKesson’s Supply Chain

If recent history has taught us anything about natural disasters, it’s that they can strike anywhere, at any time, and in relentless sequence from one to the next. Beyond their immediate devastation to life and property, catastrophic events like hurricanes, wildfires and blizzards can quickly overwhelm recovery efforts by shutting down access into and within entire towns. They disrupt livelihoods and prevent people from receiving critical goods and services—including medical supplies and pharmaceuticals.

For most consumers, supply chain operations are merely an afterthought. But when disaster interrupts the delivery of items they depend upon, such as critical medications, they certainly take notice. For McKesson, however, working to maintain a seamless supply chain process has always been a top priority. To that end, managing the delivery of critical medications in the wake of natural disaster has never been an “if” scenario, but rather a “when.” Its team has decades of experience in planning ahead to maintain an uninterrupted supply chain once a disaster hits. It also has the know-how to quickly shift operations in real time to help ensure the hardest-hit communities continue to be supported.

Those operation shifts include, but aren’t limited to, redirecting transit routes, reallocating resources to different areas, working with government agencies and partnering with other organizations to help ensure patients get their medications. And given that the U.S. has seen a 50% increase in natural disasters since the early 1980s, collaborative and innovative strategic maneuvers like these are becoming more important with each passing year.

“Give us a challenge and we’ll figure it out. We might be coming by raft, boat or canoe, but we know that at the other end of the supply chain, there’s a patient who is depending on us.”

McKesson’s focus on supply chain innovation was tested in 2005 when two major hurricanes, Katrina and Rita, hit the Gulf Coast over a few weeks. Mike Fabela, McKesson’s director of operations, remembers the day when the roof blew off the company’s Slidell, La., distribution center, effectively transferring much of the supply chain responsibility to McKesson’s Arlington, Texas, hub.

Although Texas was also dealing with the storms’ impacts, the team in Arlington mobilized quickly to begin working with FEMA and establish routes into the affected areas in and around New Orleans. “It was a monumental undertaking that included permits, licensing and meeting other FEMA requirements,” says Fabela, who recalls McKesson’s local couriers getting stopped at roadblocks as they tried to deliver supplies to some of the hardest-hit areas.

“That was [when we started] equipping couriers with emergency letters from our corporate security department, so they could get into markets,” he says. To this day, McKesson uses that strategy during all natural disasters—including at the onset of the COVID-19 pandemic earlier this year. “The police knew the popular carrier names like UPS and FedEx, but they weren’t as familiar with the names of McKesson or the local couriers,” Fabela adds.

Fabela says Katrina also pushed McKesson to more carefully map out delivery frequencies and routes. If a FEMA agency or hospital placed an urgent order for medications, for example, the company would typically send a driver directly to that destination. With multiple hospitals placing orders at different times, the company began consolidating orders and making sure different drivers weren’t hitting the same areas on the same day. “Had we not done that,” says Fabela, “we would have run out of drivers pretty quickly.”

Needing to keep its products at the right temperature, McKesson also stationed refrigerated trailers at strategic points. That way, if an order couldn’t be delivered to the customer, it could be safely stored in the trailer for delivery at a later date. Fabela says this and other strategies helped keep the drug supply chain moving in the aftermath of some of the world’s most severe storms.

“Katrina definitely taught us a lot, because it was so devastating. It forced us to become better, more organized, and more proactive,” says Fabela. “Now, as soon as a tropical storm surfaces, we’re already looking at which markets we need to get into and how we’re going to continue to serve them through the disaster.”

Battling a winter bomb blizzard with a resilient supply chain 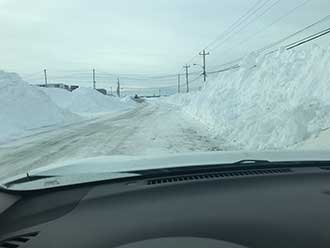 Fifteen years later and thousands of miles north of New Orleans, McKesson’s supply chain was tested again. Scott Barron knew he’d be handling some pretty complex supply chain issues when he accepted a job as director of operations for McKesson Canada. What he didn’t foresee was having to pile medications into his personal vehicle and then deliver them to a local hospital in the aftermath of a “bomb” blizzard that pummeled the St. John’s, Newfoundland, region for 24 hours in January 2020.

Once roads were passable, a co-worker picked Barron up at a meeting spot on the main road near his home. “We got to the distribution center and shoveled out the generator, hoping that it would restart,” Barron says. “Luckily, it did.” Filling an SUV from “front to back and bottom to top” with products, McKesson team members spent the next two days using the vehicle to deliver critical drugs and supplies to three hospitals.

Pharmacies were temporarily bypassed because they were unable to open. “No one else was delivering supplies to our hospitals,” Barron says, “which include a university emergency care facility that treats some very sick patients.”

McKesson employees who could make it into work joined the effort and helped ensure medicines got to the patients who needed them. “I met with our first shift after two days off due to the storm and assumed that I’d be addressing some difficult questions and hearing some difficult comments,” Barron recalls. “Instead, I walked away very proud of our employees and their commitment to keeping our critical supply chain running.”

“Give us a challenge and we’ll figure it out,” says Ammie McAsey, senior vice president of McKesson’s distribution operations. “We might be coming by raft, boat or canoe, but we know that at the other end of the supply chain, there’s a patient who is depending on us.”

McAsey says having a solid business continuity and disaster recovery plan goes a long way in helping the pharmaceutical distributor maintain operational integrity during natural disasters. “We review those plans regularly,” she says. “It’s part of our built-in cadence, knowing that the time to sit down and do that is not when a disaster strikes.”

As an essential supplier to the healthcare industry, McKesson continues to learn lessons from every new natural disaster that crosses its path. By enhancing system efficiencies, improving business processes, and hiring and developing talented team members, McKesson is better equipped to act with agility. It also maintains strong supplier relationships to better position itself to make quick, well-informed decisions on product-specific intelligence. These are just a few of the strategies that support a stable pharmaceutical supply chain.

And while each natural disaster presents new challenges from an operational perspective, Barron calls the learning experiences invaluable. “Just like everyone else,” he says, “we just continue to learn more and more each day.”

Healthcare Distributors Are the Answer

Each day, millions of patients across the country walk into their local pharmacy to pick up their prescription — from co... Read More

HDA’s Faces of the Supply Chain series continued this past month with the release of new videos featuring perspectives f... Read More